Over the past several years I have mentioned in these pages a line of new, hybrid, hardy Asian maples being developed by my friends at Iseli Nursery. I have heard from some of you in the comments here, or in other social media, how excited you are to be able to add this kind of elegant beauty to your colder, northern climates. I know some of you managed to get your hands on very early releases of North Wind® and you have had great success with these superb garden trees.

The Jack Frost® collection is a series of hybrid cultivars selected for their beauty as well as their ability to withstand the harsh winters of our colder North American regions where, until now, trees of this elegance were non-existent.

The dream began back in the 1990s when Iseli Nursery initiated their research with the Korean maple, Acer pseudosieboldianum. Their hybrid program began in 1997 when they worked to specifically cross pollinate cultivars of Japanese maple, Acer palmatum with older specimens of the Korean maples. 1998 was the year that seedlings began to be selected and numbered for evaluation. This process continues even as selected cultivars begin to make it to market through local independent garden retailers.

I spent some time on the phone with my good friend, Alan Craig, one of Iseli Nursery’s reps in the Midwest. He was one of the first to plant and evaluate these new Jack Frost®  maples in his own Zone 4 garden. Mr. Craig received plants in 2007 and they hardly had time to become established in his eastern Iowa garden when the arctic cold-snap of 2009 hit. That year was possibly the coldest on record in the area with winter temperature as low as -32°F. Imagine his excitement when he found his North Wind® to come through that winter without a blemish! The following spring brought a full and beautiful foliar display and the tree continues to thrive in both the summer heat and humidity as well as the typical frigid winter season.

One observation that Mr. Craig mentioned about North Wind’s® hardiness that is particularly useful and important is they “are less prone to surprise cold snaps in fall and spring” during a time when potentially soft, end-of-season or early-season growth stems could be damaged.

I have heard that Japanese Beetle can be troublesome in the Midwest. Mr. Craig noted that although he has seen Japanese Beetle in his area, he has never seen any on his North Wind® maple. He is quick to admit that his observation is certainly not hard science, it is simply his experience to date. Certainly something to keep in mind! 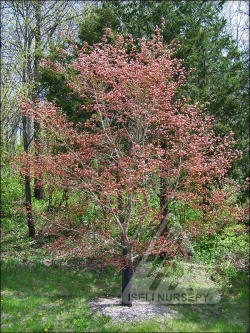 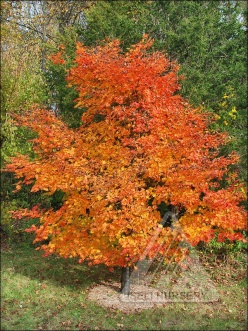 Acer x pseudosieboldianum North Wind®(‘IslNW’) is the flagship in Iseli’s Jack Frost® collection of hardy Asian maples. Other new introductions include Arctic Jade® which is another upright grower with large green leaves that turn to rich reds, orange and purple in autumn, and the first weeping, lace-leaf form to be introduced, Ice Dragon®. Both of these selections are also tested cold hardy to Zone 4! I will provide more information regarding these two selections in a future blog post.

Ed-
Conifer Lover (and maples too)

Ps, I have been assured that all of these exciting, new, Jack Frost®  maples will be making their way into more and more independent garden centers through 2017/18 and beyond!

Pps, Thanks to Alan Craig for sharing the photos of North Wind® in his eastern Iowa garden.

7 thoughts on “The dream becomes reality”

This site uses Akismet to reduce spam. Learn how your comment data is processed.

Search the Amazing World of Conifers

Catch up on Past Posts!